About the Artist – Tim Lake

Tim Lake is a singer-songwriter, composer, performer, and teacher who was born in Manhattan, New York and raised in Lexington, Kentucky. Playing banjo and guitar, Tim has been a professional musician for over 40 years, has released eleven albums of original songs, and has performed internationally and across the United States with his group “The Little Big Band.”

Tim received a doctorate in music in 1991 from the University of Kentucky. In 1993, he performed and recorded the world premiere of his doctoral work, “An American Concerto For 5-String Banjo And Orchestra,” with the Atlanta-Emory Orchestra in Atlanta, Georgia. In 1995, his concerto was awarded Kentucky’s prestigious Al Smith Fellowship for music composition and he has also received recognition as a composer from ASCAP’s Standard and Popular Awards panel from 1994 through 2017.

Rounder Records released Tim’s first recording entitled “Same Old Roadside Inn” and in 1993, Tim started his own company, Padraig Records LLC, which has since released six compact disc/cassette recordings. His recording efforts are very diverse in scope but easily fall within an ‘eclectic folk’ and Americana category in that they are unique banjo related efforts. “Jazz With Bluegrass And Blues” has as its major focus the singer-songwriter and banjo player attributes of his music while the “banjo concerto” and selections such as his banjo arrangement of Beethoven’s “Für Elise” should intrigue classical aficionados as well. The Padraig Records/ Audio Park release entitled “Live In Tokyo, Japan” features two duets with Japanese traditional musicians on shakuhachi and shamisen while “Kentucky Home” is a two CD set that is Tim’s first recording to feature primarily traditional music. He has received acclaim from respected music critics such as Nat Hentoff, Paul E. Comeau, and John Lupton.

Tim’s trio plays an eclectic mix of American music presented in an original show on banjo, guitar, bass, fiddle, and mandolin. The recording “Jazz With Bluegrass And Blues” best demonstrates his live show. A typical performance will take the listener through original songs with thought provoking lyric content, to Classical music on the banjo, to Jazz, and finally, to Bluegrass and Blues.

As a banjo artist, songwriter, and composer of the highest order, Tim Lake has performed his brand of American music with Kentucky style in international music festivals and concerts all over the world, including Tokyo, Osaka, and Yokosuka, Japan; Ambato and Quito, Ecuador; Bø, and Oslo, Norway; Graz, Austria; and Wexford, Ireland. His form of American music, boundless and refreshing, will always be welcomed by world audiences.

1987 — Present
Speaker for Elderhostel Programs at the University of Kentucky

1993 — Present
Started Padraig Records and Padraig Publishing for recording and distribution of his original music.

Tim Lake ‘s recordings are receiving radio play from PBS stations across the US , Europe , and Japan.

To order recordings or receive booking information, direct inquires to:

I would like to begin by thanking Dean Robert Shay, Dr. Ron Pen, Jane Johnson, and all the great people at the College of Fine Arts .

Congratulations to you the graduates! 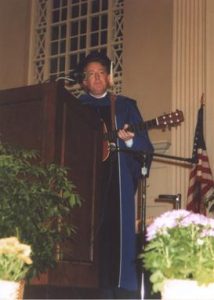 I would like to say that I remember my first graduation day well. But I graduated sometime during my twenties, and I don’t remember being twenty-anything.“21-22-23-24-25-26-Hike!” I wrote a song about my first graduation, so I would not forget. I’ll sing it for you.

I am an idealist. I am also a banjo and guitar player. I’ve always thought of myself as “Diogenes With A Banjo.” You remember, ‘tradition ascribes to him the famous search for an honest man conducted in broad daylight with a lighted lantern.’ I think Diogenes was an idealist, and perhaps history’s first documented ‘peeping Tom.’ I can only imagine the places you might have to search looking for an honest man. I know that I am, very possibly, in the midst of more idealists at this very moment than at any other time of my life. You must be idealistic to get a degree in Fine Arts! I know, because the only degrees that I have achieved are those inspired by idealism. We know that the arts make the world a better place, but sometimes it is hard to convince the world of that fact. Therefore, it is not easy to achieve the balance between artistic endeavors and the dollars and cents of everyday life. But the balance can be accomplished. I had no great financial plan. I only followed my heart and my dreams doing something I love. It was idealism that put me on this musical path, and I will follow it until the day I die.Please do yourself a favor, stay idealistic and never give up on your dreams. I can assure you that you can make living in the arts even though, as you grow older, the struggle will become greater as unseen forces pressure you to assimilate into the status quo.

I came to the University of Kentucky for… KNOWLEDGE. In a most idealistic way I went to school as a hobby because I wanted the knowledge. Knowledge made me better at my art. I try to make my music satisfy what I like to call the three “Es.” I hope to; Entertain, Educate, and ultimately Elevate the listener. Kentucky Perhaps it would be wiser to say “Education Pays-Knowledge Stays. For Knowledge is Education’s Destination.” welcomes its visitors with road signs that say “Education Pays.”

I would like to thank all the wonderful professors at the University of Kentucky that helped me by sharing their knowledge, and I would like to thank the few professors who gave me a hard time thus providing me with my ample supply of anger that continues to fuel my achievement to this day (they know who they are). I would also like to thank the secretaries. I doubt that I would have graduated were it not for the great secretaries who helped me distinguish between “the red form, blue form, green form, yellow” and otherwise navigate the maze of a major state university.

You have chosen to honor me even though, in my view, I have not yet achieved but a portion of my dreams for I, to quote Robert Frost, truly “have miles to go before I sleep.” Being neither dead nor a star, you must have chosen to honor me simply because you think that my achievements have value. For that I humbly thank you, and I promise you that I will daily strive to make you proud of me and your decision. We have a lot to be proud of here in the state of , and it is good to recognize the achievements of its resident citizens. Kentucky

I was not born here; I was born in New York City . I am a Kentuckian because I was raised here in Lexington . Raised in a good middle class family by two great parents who hail from America ’s “greatest generation.” I received everything I ever needed. I still have the silver spoon that I was born with although, thankfully, my parents took it out of my mouth long ago.

I will now leave with a wish for the graduates. May you strive to be extremely ambitious in pursuit of your dreams and in your charge to make this world a better place, work exceedingly hard with an honest heart, live a life filled with passion for what you love and pray for the strength and patience to accept each defeat as but a building block for your life’s foundation that will forever stand as you reach your final victory. Thank you and enjoy the music!

Now for my song “Graduation Day.” I personally hate sing-alongs, but it might be fun for us all to sing “Pomp And Circumstance.” If you do not want to sing, you don’t have to because this is your graduation day. I have to because I need the honor.