This is my primary banjo. I bought this banjo in 1976 and it has been my mainstay ever since. I have played this banjo on every recording including my banjo concerto.

This great acoustic guitar is supposed to have belonged to the famous guitar player Grady Martin, who played for Willie Nelson. I bought it because it sounded great and I continue to play this guitar on all of my recordings.

I did not want to any longer chance damage to my older banjos so I bought this banjo as a traveling instrument. I played this banjo on my “Live In Tokyo” CD and, for a new instrument, it sounded good. The recording was a spur-of-the-moment endeavor after I was invited to make the album by Mr. Terada who heard me play at my first Tokyo gig. I told him that I would really like to make a recording of my live solo performance and I asked him when he would like to do it. “How about this Sunday?” was the unexpected reply. I didn’t have the time to come back to Kentucky and get my old banjo, but I like to think the album sounds pretty good with the new one.

I bought this guitar while I was in Ireland during the month of July in 2005. It is rare for me to buy a guitar while I’m on the road, but this instrument kept calling me back to the Dublin music store (Perfect Pitch) where I first played it until I knew, after my third visit, that I was bound to buy it and make it part of the family. It is always on the stand next to this computer where I am writing these very words and when I can’t stand the daily work of the music business any longer, I take it up and find a bit of sanity in this hurried world. I can’t wait to record with my new found friend.

I play this 4-string banjo for all of my Dixieland gigs and for Big Band music from the early twentieth century. This is the type of banjo that Eddy Peabody played and I have had the privilege of playing this instrument for repertory performances of George Gershwin’s “Rhapsody In Blue” and Duke Ellington’s early Big Band music.

This classic “jazz” guitar is one of my favorites. I played this on the song “Backhome” from my first Rounder Record album and I continue to play this guitar for “Big Band” and cocktail jazz gigs.

Hugh Sturgill, who produced the likes of J. D. Crowe and my first Rounder album “Roadside Inn,” gave me this guitar many times. I knew that one day I would have to pay him for it and when I did (have to pay him) he gave me a great price. This series of guitars was made for J. D. Crowe and it serves me well as a great “gigging” instrument.

This arch-top banjo is a classic addition to my collection. I bought this banjo from Rod Case who played for The Boys From Indiana. I use this banjo in the studio for the “raised head” sound and to teach.

This is a very beautiful frailing or clawhammer banjo. The neck has a carved heel and is made of a piece of “birds eye” maple that is like looking out at a packed house staring back at you.

This is a Orville Gibson original with “The Gibson” on the headstock and a “calf skin” head. I only play this instrument when I do presentations on American music and I am very happy to see that audiences are as fascinated as I am with this historical banjo.

This instrument was made by Jerry Robinson, a Luthier who was a banjo student of mine. He made it so he could practice quietly at night without waking his sleeping family. I was enchanted by the sound that came from this jazz guitar body and 5-string neck so much that I bought the instrument and wrote “Was It Something You Said?” on it. On my little-known “Sweet ‘N Sour” recording I played the song on this instrument. I have subsequently recorded the song playing ‘regular’ banjos but I still like the Bantar sound the best. One day I would like to make an entire album with this instrument.

This nylon-string guitar was purchased by me parents in order to “keep me out of the pool rooms,” as they used to say. It worked, and I even played this instrument for “El Toro en la Selva” (The Bull in the Jungle), my score for a PBS documentary about the Costa-Rican cattle business entitled “On the Horns of a Dilemma.”

My cousin gave me this “open back” frailing banjo and told me that it belonged to my grandfather. When I picked it up I wrote “Are You Happy?,” a frailing tune that is on my “Jazz With Bluegrass And Blues” CD. I have always found it interesting that at times I can play an instrument with an entirely new sound and be inspired to write a new song. I guess this is why I have so many instruments.

This banjo was given to me by my family as a birthday present. The ‘calf skin’ head is cracked and therefore I only use this instrument as decoration because I cannot find such a small replacement head or a person who will put on a little animal skin head for me.

This is my only solid body electric guitar. In the past I have used this guitar for rock gigs and very sparingly in the studio. I am not an electric guitar player, but I do believe that if decided to play electric guitar more I could probably get good electric players to pay me not to play. Of course, this career move is way down on my list of options concerning making money and my musical future.

My good friend Kazuo Neichi from Japan gave me this shamisen. He is a great bluegrass music fan and I met him in Lexington many years ago when he was looking for Lemco studios (the home of Cecil Jones and many famous Bluegrass recordings). He expected to find a big sign out front and seemed surprised to discover that Lemco studios resided in a garage behind Cecil’s suburban home. I am proud to have recorded at Lemco and I know that Neichi-san was glad to see the place where so many great recordings were made. As far as the shamisen is concerned, I think that could make a lot of my becoming a player, going to Japan, and getting good players to pay me not to play. With no frets, I find it next to impossible to play anything in tune. 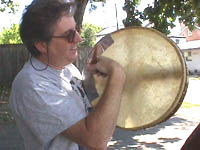 I actually played this Irish drum on a recent recording. I love the primal sound of this instrument and I have actually considered going to Ireland, becoming a professional Bodhran player, and having good players pay me not to play.

This is the best sounding upright piano that I have ever heard. The best musician to ever play this piano is Jay Flippin who is a truly great player. This piano really deserves the attention of such a master because it must summon up limitless patience when being played by the likes of me.

I have used this instrument countless times over the years. I played the piano and strings on this M1 for the song entitled “A Great Country” that is on my Jazz With Bluegrass & Blues album.