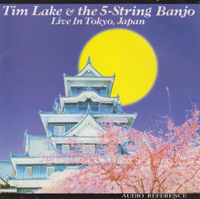 “Live in Tokyo, Japan” by Tim Lake showcases his live solo show on banjo and vocal with guest appearances by two of Tokyo’s fine traditional musicians, Shofu Yoneya on Shakuhachi and Jo Fujii on Shamisen. Recorded live on October 26, 1997 as a joint project between Padraig Records and Tokyo’s Audio Park Label, this performance is unique because it features Lake’s eclectic banjo playing and singing in an unaccompanied format. Seven of Lake’s original songs are featured along with exceptional arrangements of Japanese classics such as “Sakura, Sakura” (with Shakuhachi) and “Tsugaru Duet” (with Shamisen).