An American Concerto For 5-String Banjo And Orchestra 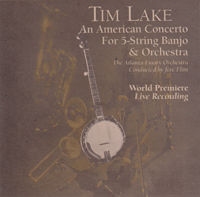 An American Concerto For 5-String Banjo And Orchestra

As winner of Kentucky’s prestigious Al Smith Fellowship for music composition and twice recognized by ASCAP’s Standard Awards panel, this concerto, entitled An American Concerto For 5-String Banjo And Orchestra was composed by Tim Lake and released as a LIVE recording on Padraig Records. The premiere took place on April 27, 1993, by Tim Lake and the Atlanta-Emory Orchestra under the direction of Jere Flint at Glenn Memorial Auditorium in Atlanta Georgia.

The concerto is a three movement work of original themes with stylistic influences spanning the complete history of music. It is a semi-programmatic work which depicts an immigrant’s voyage to America. This piece is undoubtedly the first of its kind and should be a must for any serious collector of music. Other original compositions offered in this package are unique solo piano works and an oboe/bassoon duet. The potential of the 5-string banjo is further explored with Tim’s arrangement of Beethoven’s classic Für Elise. (Click Play button to listen to a clip of each song on the CD.)